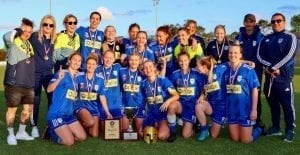 Newcastle Olympic has today reinforced its position as the premier football club in Northern NSW. Adding to the club’s long history of success in men’s football, the club is continuing that success in the women’s game through being crowned:

Together with strong performances by the club’s U17s and U14s girls teams, Newcastle Olympic is the only WPL club which will be involved in the finals series in all four grades.

“It feels quite rewarding to bring success to the club after all the support we have received. To be able to give back to Olympic is very important for us as well.” said WPL Head Coach Harmonie Atwill.

“The club’s been amazing and we’re so glad we could secure The Herald WPL Premiership for Olympic. It’s a fantastic feeling to be wearing the blue & white.” added 1st Grade Captain Sophie O’Brien

“From the day we committed to entering the WPL, our focus has been on building ‘One Club’ – women, men, girls and boys. From first grade through to the U6s. While we are obviously thrilled at winning these premierships, what is even more important is that we have integrated everyone into the one premier club.” said Club President George Sofianos.

“The really exciting thing is that we have achieved so much in our first year in womens football. There is much more improvement to come in 2021 and beyond.” said Mr Sofianos. 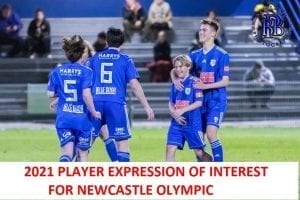