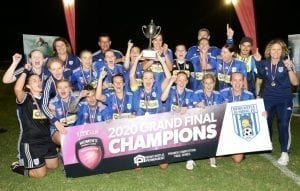 Newcastle Olympic completed what coach Harmonie Attwill described as “a fairytale” first season in Herald Women’s Premier League by sealing the premiership-championship double with a 3-2 win over Warners Bay at Macquarie Field on Sunday.

The grand final was tipped to be a thrilling affair with the league’s two most prolific goalscorers lining up in opposing sides in Jemma House for Olympic and former National Women’s Soccer League player Jen Hoy in Panthers colours. And they did not disappoint.

House has proven the difference on many occasions for Olympic this year and the classy striker produced another player of the match performance to set up the victory. She scored twice in the first half as the premiers took a 2-1 lead into the break then crafted the third as Olympic skipped out to a 3-1 lead before the Panthers struck back then applied a mountain of pressure.

“It was an excellent game,” Attwill said post-match. “Warners Bay played excellent. They were dangerous all over the park and very structured. It was hard to break them down but luckily we did.

“You can’t expect 10 opportunities in a grand final – they’re going to be few and far between. So it was more a matter of taking the opportunities when they came. Or if we felt like that weren’t happening, we really had to create. And credit to Jemma. I’ve said that about her before – if something’s not going her way she finds a way to make it. And I do think she was the difference for us today.”

The game was only five minutes old when House volleyed into the net from close range after Georgia Amess broke down right, beat the Panthers defence then crossed the ball into the box.

Hoy equalised in the 13th when she chipped an advancing Olympic goalkeeper Natalie Wiseman then sped away from the defence and buried the ball into the far corner.

House headed into the net from a Georgia Little corner in the 41st minute.

Wiseman parried away Hoy’s long-range shot in the 53rd before denying Annika D’Amico with a diving save to her right in the 57th.

Olympic midfielder Laura Hall scored with a tap-in in the 65th after House unleashed a long-range effort which hit the right post then the left before being pushed off the line by Panthers’ shot-stopper Ally Boertje.

Panthers midfielder Elodie Dagg scored in the 67th then came close to tying the game up in the 80th when her free kick was tipped over the bar by Wiseman. A long-range effort from Hoy was cleared off the line by Brooke Summers with five minutes remaining.

Warners Bay coach Craig Atkins was disappointed to lose but full of praise for a team he rebuilt this season after the departures of a host of talent.

“It was a fantastic effort from our girls and they showed why they deserved to be here,” Atkins said.

“They never gave up. They were fighting to the death and that’s the culture we’ve created this year. We’re looking forward to next year.

“We’ll celebrate the season tonight. No one expected us to be here but we did. We always had that belief.”

Earlier, Adamstown beat Olympic 2-1 to win the reserve-grade grand final, Merewether downed Olympic 4-2 in the 17s decider and United were 3-2 winners over Mid Coast in 14s.